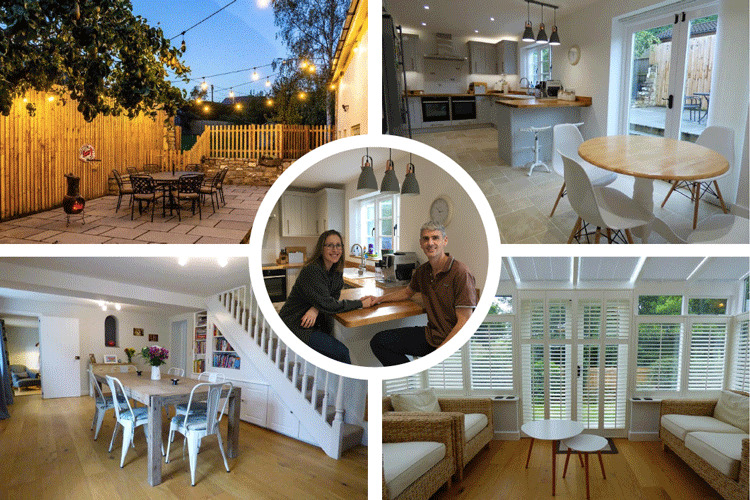 Once a terrace of three, traditional rural dwellings, Rose Cottage has seen many changes since it was requisitioned during World War 1 for the National Shipyard at nearby Beachley, on the confluence of the Wye and the Severn.

Today the property is probably unrecognisable, as a freshly finished and fiendishly family-friendly home. Yet, carefully retained and cleverly incorporated into its cool, contemporary new look are some charming original features, including an open fireplace and exposed beams. Its new décor also includes subtle nods to its heritage.

When project managers David and Kirsten Suttill had just finished the cottage’s complete transformation, they found out that, sooner than expected, they had been granted visas to work in Canada. If it was not for that, you get the impression that Kirsten would definitely not be leaving her dream kitchen, with its sleek, fitted cupboards, stone floor tiles, oak worktops and adjacent playroom!

“We finished it in about March. It’s got all the gadgets – a wine fridge, space for a double fridge freezer, underfloor heating, which is lovely to walk on without slippers…” What’s more, Kirsten was just beginning to appreciate the clever, new kitchen and playroom layout. It is a welcome change from the cottage’s original configuration, when the kitchen was a smaller room at the other end of the house. 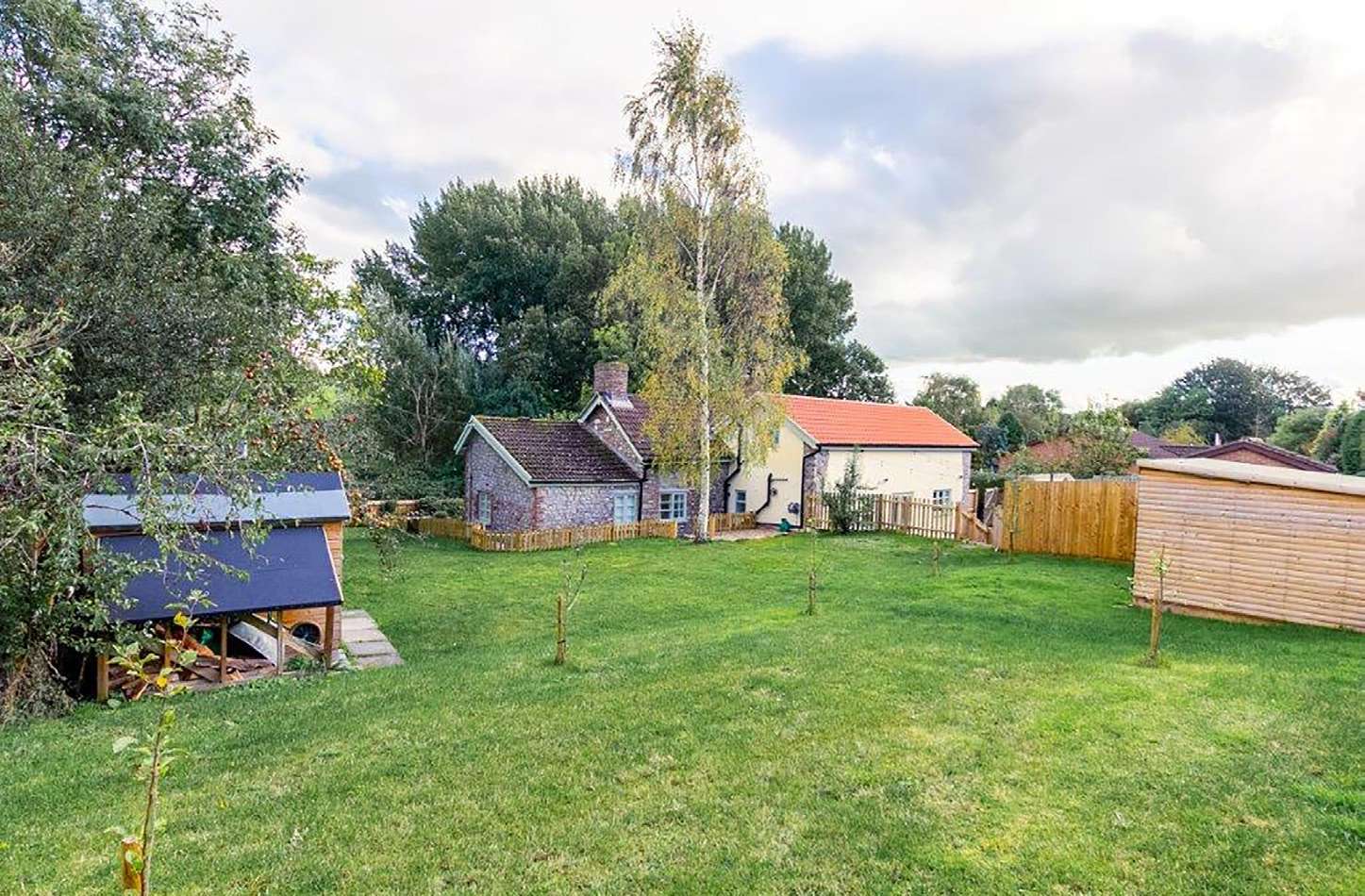 “We have a two-year-old and a three-year-old so I wanted a playroom just off the kitchen because I spend a lot of time here and I wanted to be able to interact with the kids. Also, we would have people over and I would be stuck in the kitchen, where it felt like I was locked away!”

The former kitchen now serves a new purpose as a home study, benefitting from the peace and quiet away from the rest of the house! Alternatively, it could be used as a fifth bedroom, served by the downstairs shower room.

The new kitchen, with a breakfast bar and casual dining space, has been designed for ease of family living. Says David: “The playroom is off the kitchen and it’s a dead end so it’s totally the kids’ area.” Meanwhile, French doors from the kitchen open to a sheltered courtyard and a garden beyond, both carefully child proofed, with gates and fences. The garden incorporates child-friendly features like a playhouse and there’s a low-level basketball net in the courtyard and a matching pair of steering wheels for their children to play cars.

Rose Cottage, on Beachley Road in Sedbury, had been converted into a single house by the time David bought it. However, he understands it was once a terrace of three cottages and believes that, before the first Severn Bridge was built, one of them was home to a ferryman who worked on the ferry between Beachley and Aust. In 1917, when Beachley was taken over by the War Office to create a National Shipyard, the inhabitants of these cottages and many other local dwellings had to move out with only 11 days’ notice.

Since David bought Rose Cottage in 2006, he and Kirsten have updated and improved it in stages. They emigrated to New Zealand mid-way through the project before returning three years ago to complete its refurbishment. “It was a ramshackle building and in a pretty rough state,” says David. “I basically just bought four walls and a roof! It was part of the original mortgage conditions that it had to be re-wired and treated for woodworm so everything was taken back to the bare walls, leaving just a shell and I built it back from there.

“We rented it out when we went to live in New Zealand for six years and when we came back, it was Kirsten who came up with the brainwave of moving the kitchen. That has made the house much more inclusive and better for entertaining,” says David.

The re-designed cottage now has a natural flow, with the front door opening into a dining hall with doors leading off to the living room, study and kitchen. The focal point of this light and airy room is a large open fireplace with a wood burning stove set on a slate hearth. Whilst David sourced a reclaimed oak beam to form the lintel, the fireplace itself is original and includes a little ledge at the back, which the couple use for warming their Christmas mulled wine. On the wall opposite the fireplace, David was careful to retain another quirky historic feature – a little alcove set up in the wall.

Keen to provide as much storage space as possible, the couple employed a skilled local carpenter to build in cupboards under the stairs. He also made the built-in wardrobes for two of the bedrooms. 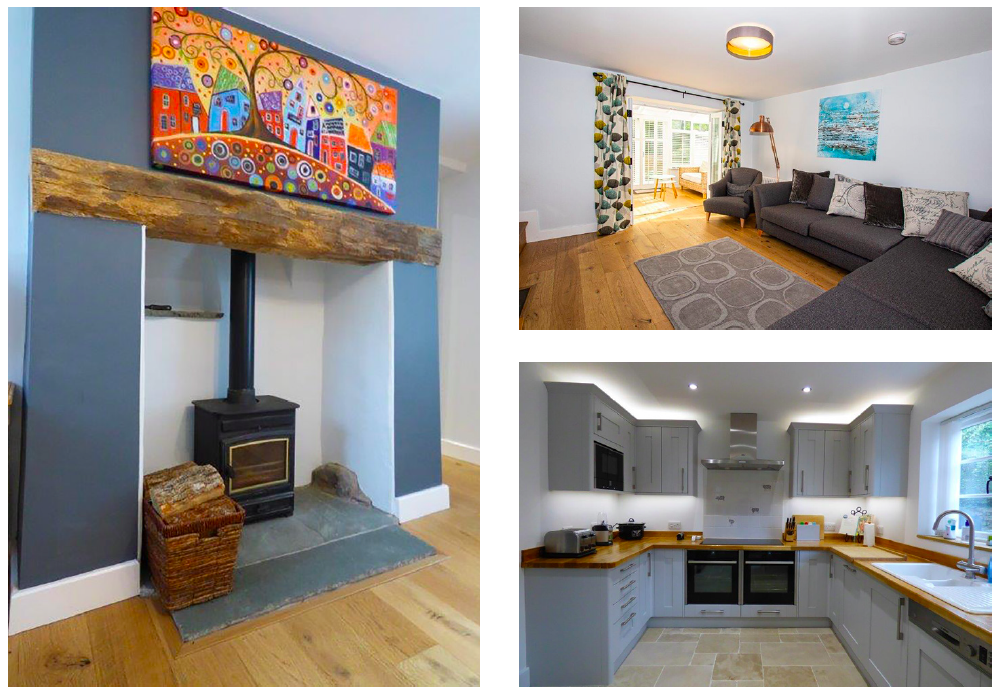 The couple chose engineered oak flooring for the dining room and the adjacent living room and carried this through into the conservatory. A beautiful addition to the cottage, the stunning, handmade wooden conservatory opens from the living room and looks over the front of the property. “In the summer, that’s our favourite part of the house,” says Kirsten. The couple also love the sheltered Mediterranean-style courtyard at the back of the property, which leads off from the kitchen. They have strung lights over it so that in the evening it makes particularly atmospheric outdoor entertaining space. “It’s like having another room,” says David. Kirsten adds that the conservatory gets the sun in the morning and the courtyard gets the evening sun.

When the couple added the two-storey kitchen extension, they included a first floor master suite with an en-suite bathroom and a walk-in dressing room. There are an additional three double bedrooms in the older part of the property, one served by an en-suite shower room and the others sharing a family bathroom.

Whilst it retains some of its original cottage features, Rose Cottage is decorated in fashionable, neutral colours, to give it a fresh, contemporary feel. “I love grey and pretty much everywhere I painted a wall, I did it a shade of grey,” says Kirsten. Here and there are reminders of the cottage’s rural past – like the tractor seat-style stools at the breakfast bar and the stylish feature tiles depicting animals incorporated into the tiled splashback above the AEG five-ring induction hob. “I didn’t want chintzy, cottage style,” says Kirsten. “I wanted it modern but in keeping.”

In a lovely location on the edge of Sedbury, Rose Cottage has views over trees and fields to the front and sits in about quarter of an acre of gardens, mainly to the side and back of the property, with well-maintained lawns, borders and shrubs. “The people I bought it from were keen gardeners and they had planted lots of fruit trees – walnuts, apples, pears,” says David. “They even left us a map to show what was where,” adds Kirsten.

Leaving a property that they have planned to perfection is going to be a wrench for the couple. “I really love this place…” says Kirsten. “It’s sad to have to leave…”

The engineered oak flooring, which the couple chose for the main living areas, is from Classic Floor Company, 18 St Mary’s Street, Chepstow 01291 409841 www.theclassicfloorcompany.co.uk

The courtyard and front patio are laid with paving slabs from The Home of Stone, Whitecliff Quarry, Newland Street, Coleford 07968 996270 www.thehomeofstone.co.uk

The wood burner in the living room was supplied and installed by Salter Heating, 6 Station Road, Chepstow 01291 621545 www.salterheating.co.uk