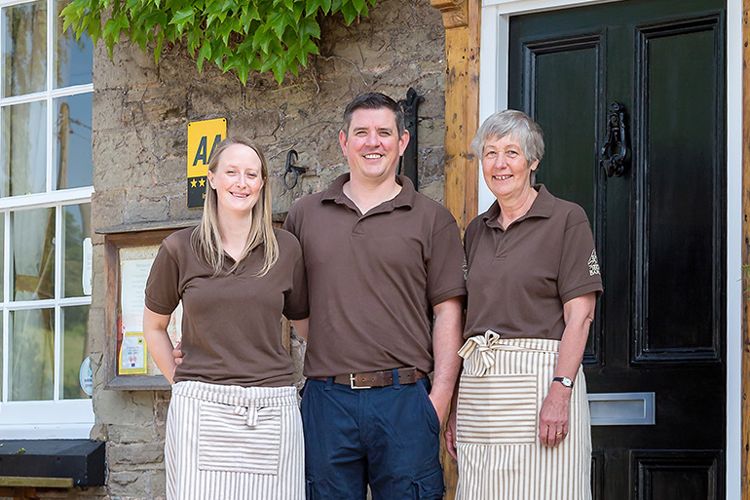 Gill Jinman, whose family own and run The Temple Bar Inn, enthuses to Sharon Chilcott about what makes Ewyas Harold such a “thriving, inclusive community.”

How long have you lived in Ewyas Harold?

Since 1958, when my parents moved here. My father was a vet and he helped set up the first veterinary practice in the village. Apart from five years spent in London, I’ve lived here or nearby for most of my life since.

What makes it special?

Ewyas Harold is on the Rambler’s Herefordshire Trail, close to the Welsh Marches, Black Mountains, Offa’s Dyke, the River Monnow, and the Golden Valley – all places of great natural beauty. It is near many sites of historical significance (Dore Abbey, Bacton Church, Arthur’s Seat, Kilpeck Church) and within half-an-hour’s drive to Hay-on-Wye, Abergavenny, Monmouth and Hereford.

Even though the village has a small population (around 1000), it is special because it benefits from all that a thriving community needs. It has a village store and Post Office; family butchers; two pubs, one with a 2AA rosette restaurant; an award-winning fish and chip shop; a GP surgery; dentist; hairdresser; veterinary surgery; builders’ merchant; primary school; recreation ground; community library; village hall, and three churches. It’s also only a mile from Pontrilas, with its Active Ageing Health and Wellbeing Centre and Gym which includes a Dementia Friendly Café, art and craft activities and holistic therapies for carers and those being cared-for.

Community transport is available for those needing to go further afield for shopping or hospital appointments. Village venues host bowling, exercise, karate, ballet, yoga and Zumba sessions, and there are pub pool, darts and boules teams too. For People and Planet is a local group supporting Fairtrade and holding regular collections of items not recycled by the council and undertaking litter picks. 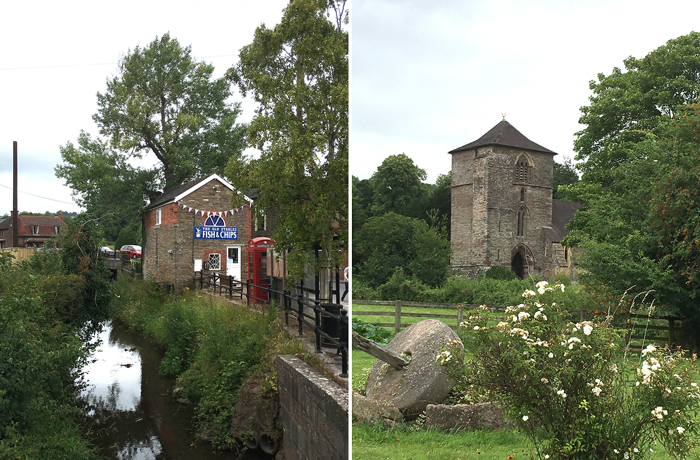 For you, personally, what’s the best thing about living there?

Feeling part of village life – everyone greets each other and passes the time of day with you.

What, if anything, spoils it for you?

The paucity of public transport and drivers who do not respect speed restrictions or double yellow lines.

Describe the vibe in your local pub.

There are two pubs in Ewyas Harold; the Dog Inn, a traditional local which opens between 3pm until around 10.30pm most evenings and does not serve food and The Temple Bar Inn, which is owned by our family and run by my daughter Philly Jinman (who is also the head chef) and her partner Dave Hope. It is winner of the AA’s Friendliest B&B of the Year Award (for Britain) 2018- 2019. It is also a free house with an award-winning restaurant. The bar opens from 11am daily to serve coffee and homemade cakes as well as local beverages and lunchtime bar meals. ‘Locals’ frequent both pubs, as well as the fish and chip shop on the opposite side of the road, and the vibe is a friendly one that welcomes visitors, too.

Where do you go for a casual evening out?

Unless I was going into Hereford to the cinema, I would be most likely to call in at The Temple Bar Inn for a meal with family and friends.

Where do you go to “blow the cobwebs away”?

For a walk on Ewyas Harold Common, which covers an area of over 120 acres and is home to more than 200 species of wildflowers, ferns and fungi and a haven for butterflies, including some that are rare elsewhere in Britain. It is also home to some rare species of birds, as well as grass-snakes, slow-worms and adders. On summer evenings after dusk, the fluorescent green light of glow-worms can be seen here too.

Walking or swimming, mostly. I used to play tennis at Madley Tennis Club and would like to join our local book club and learn a creative craft.

Where would you shop for day-to-day groceries?

There are supermarkets in Hereford and Abergavenny, each about 14 miles away and then, closer to home, there’s Ewyas Harold village store; Hopes of Longtown, where I would also go for speciality local and regional produce and Lock’s Garage, a petrol station, with a selection of exotic fruit and vegetables.

Where would you shop for a dinner party?

RJ & RB Mailes, the family butcher in the centre of the village, for the best, locally-sourced cuts of meat; Windmill Hill Fruits, for soft fruit (about 11 miles away) and nearby Rowlestone Court for their ice cream and sorbets.

In what ways are you involved in your local community?

The Temple Bar Inn helps fundraise for local and national charities and was a finalist in the Hereford Times’ Community Pub of the Year competition 2018.

I was the pub’s venue co-ordinator for art exhibitions during the 2017 and 2019 Ewyas Harold Festival of Arts and am on the Festival Committee.

Tell me more about the festival…

The last arts festival was an event that engaged the whole community; even patients of the GP surgery helped make over a mile of bunting which festooned the village. More than 60 home-made scarecrows put in an appearance, the church bells rang, the church flowers were done in festival colours, choirs sang, and local arts and crafts of a very high standard were exhibited in six village venues. The Psychedelic Hearts Club Band played at the pub, llamas put in an appearance at the village hall, and there were opportunities to participate in pottery, weaving and other craft workshops. Venues provided refreshments throughout the festival, the Temple Bar Inn held a Beer Festival, and Sunanta’s Thai (based in the village) also had a stall selling freshly prepared Thai food.

Visitors remarked on the ‘wonderful community’ we have that ‘works together to include so many people’.

If all goes to plan the next festival will take place in 2021.

What’s the most memorable outing you have had in the area recently?

Llama Trekking with Golden Valley Llamas from Old King Street Farm in Ewyas Harold. Llamas are very curious animals and like to stop and look around when something catches their attention, which in turns draws your attention to the beautiful local scenery, flora and fauna.

If adult friends were staying with you for a week, where would you take them to visit?

Dore Abbey and nearby Bacton Church; The Cat’s Back, which is a reasonably straightforward yet most spectacular Black Mountains walk and Hay-on-Wye. I would also make an appointment to take them to Fair Oak, (near Bacton), a farm making cider in a seventeenth-century stone mill, which is worked by a horse.

Tell me one fascinating fact about Ewyas Harold.

There was a castle in Ewyas Harold before the Norman Conquest. It was one of only four castles to pre-date the Norman invasion (two of the others were also in Herefordshire – Hereford Castle and Richards Castle). All that remains now is the castle motte.

For more information on Ewyas Harold visit: www.ewyasharold.com Follow on Facebook to keep up to date with plans for the 2021 arts festival: www.facebook.com/ewyasharoldfestivalofarts/