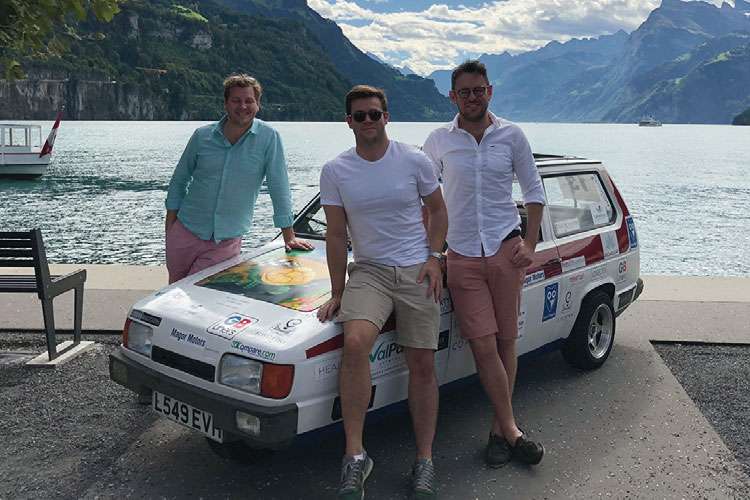 A trio from Fine & Country estate agents drove a Reliant Robin from Sheffield to Monte Carlo to raise money for youth homelessness charity, Roundabout, in the Bangers and Cash road trip fundraiser from 21st – 24th September, but they hit a few bumps in the road.

The Fine & Country team became the first vehicle in the 21-car event to breakdown: the handbrake snapped just 37 miles into the 1,219 mile road trip. By comparison to their other breakdowns, this was minor. On day three of the challenge, while on their way to the St Gotthards Pass, the engine dropped out and oil poured out.

In true ‘Bangers and Cash’ style, the team called the engineers and tied the engine back into place using cable ties. The unorthodox approach worked a dream, until 30km from the Monte Carlo finish line when they inevitably broke down again. After nursing the car with another bottle of water, the team eventually crossed the finish line and were greeted with cheering fans and their fellow Bangers and Cash teammates who arrived hours earlier.

Fine & Country took part in the road trip to support The Fine & Country Foundation, which is partnered with homeless causes in the UK and overseas, including Roundabout, a local homeless charity in Sheffield and member of the End Youth Homelessness campaign.

Fine & Country sold logo space on the Reliant Robin to raise more than £3,700 for youth homelessness. The car is plastered with more than 20 company logos, including the Property Drop logo, which helped the team to stand out even further.

Over the four days the team had photos and videos taken, were filmed on BBC Radio Sheffield who also had a team and were stopped in the streets by curious passers-by. The whole challenge has raised more than £50,000 for Roundabout, and rising.

Each bonnet was painted by professional artists in Sheffield. The Fine & Country team appropriately chose the design of the Tortoise and the Hare. The bonnet will go on auction with all proceeds going to Roundabout on Saturday 20th October. To place a bid for the bonnets please visit, https://galabid.com/auction/bangers.

The Fine & Country Foundation embarks on a variety of fundraising events for homeless charities and causes; from fashion shows to treks up Mount Kilimanjaro. For more information on their work and the charities they support, please visit www. fineandcountryfoundation.com.