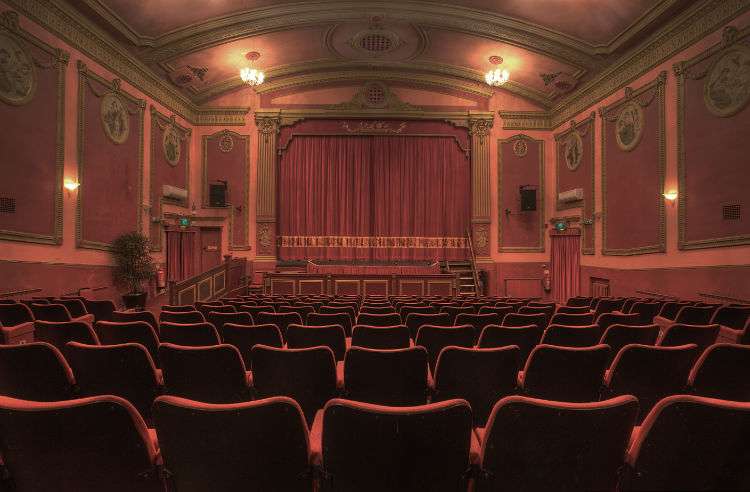 The Savoy Theatre Monmouth gears up to celebrate 90 years of Variety this March.

The site has had a splendidly varied history. The Bell Inn which stood on the site in the eighteenth century was known to have put on theatrical presentations and a visitor to Monmouth in 1773 records seeing a performance of David Garrick’s The West Indian.

The Grade II listed building in which the present theatre is housed was constructed on the foundations of the Bell Inn. Originally known as the Assembly Rooms, it opened in around 1832 as the Bell Assembly Rooms, part of the Bell Hotel. The venue was first granted an entertainment licence in the same year.

It was refurbished as the Theatre Royal in 1850 under J. F. Rogers, and later became the town’s Corn Exchange. It has been through many owners and name changes down the years: Flannel Exchange & Assembly Rooms, Oddfellow’s Hall, Bell Assembly Rooms, New Theatre/Theatre Royal, Corn Exchange, The Bell Rinkeries Living Picture Palace, Palace, Scala Cinema, Regent, New Picture House, Magic Lantern Theatre and of course Savoy to name but a few!

The Savoy is privately owned by the MacTaggart family. Grandfather B.T Davies was a collector of cinemas and at one stage owned nineteen around the South West and South Wales. The Savoy is the only one left in the family’s ownership. They lease the building to the Monmouth Savoy Trust which comprises a group of local enthusiasts who have come together to run, maintain and programme the building. 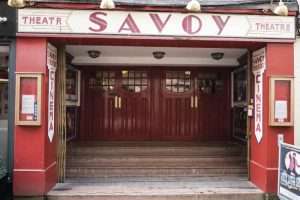 Although the Savoy has predominately been used as a cinema for the last hundred years, it was clearly built as a theatre and therefore the present Trust believe that there should be a healthy mix of films and live entertainment. The Trust relies on volunteers who help to run both cinema and live shows.

Tony Robinson & Miles Jupp will be headlining the celebrations across a series of dates in early March. Tony Robinson, Savoy Patron, will be presenting a double bill on Saturday 17 March to cater for both young and old. For his matinee performance (2:30pm), Tony will be bringing to life his successful series of history books for Children ‘The Weird World of Wonders’. Take the children along to join Tony, the Curiosity Crew and Nits the dog as they gallop headlong through time, pointing out all the most important, funny, strange, amazing, smelly and disgusting bits. In the evening (7.30pm) Tony will be sharing stories from his autobiography ‘No Cunning Plan’; from Baldrick & Blackadder to Comic Relief & Knighthood.

Across the actual 90th anniversary weekend (Sat 3 March – Mon 5 March) The Savoy will celebrate with a mixture of cinema and live entertainment, local, national and international. A recent family film favourite gets the fancy dress / sing-a-long treatment as the Savoy Youth Theatre present Frozen at 2pm on Saturday 3 & Sunday 4 March.

To mark the celebrations in style, two local amateur theatre companies will come together for one night only (Sat 3 March, 7.30pm) to present an evening of music and comedy. Monmouth Musical Theatre will deliver the music and Monmouth’s Off Centre Theatre will provide the humour with sketches. Miles Jupp, presenter of the everpopular BBC Radio 4 News Quiz, will be gathering a collection of his comedy chums to present a gala evening of good humour on Sunday 4 March (7.30pm).

To top off the celebrations, on Monday 5 March, there will be a screening of the very first film that opened the then New Picture House on Church Street, exactly 90 years to the day. A rare opportunity to see a classic of the Silent Comedy era on the big screen; the legendary Harold Lloyd, Hollywood star of the early twentieth century, takes the lead as ‘The Kid Brother’ (7.30pm).