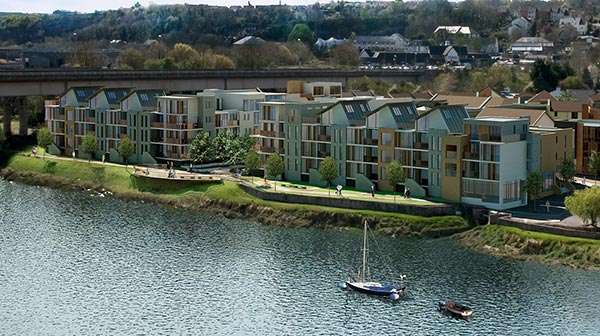 Estate agents in South Monmouthshire claim about 80% of home buyers are now coming from the Bristol area ready for the halving of the Severn bridge tolls.As a result, property prices have been rising quicker than the Wales average as Bristol commuters seek new homes, figures have suggested.

“House prices in Bristol are off the scale,” said agent Charles Heaven.

“People know the tolls are coming down next year and hoping to get a bargain.”

The bridge tolls will drop when they return to public ownership next year and all assembly parties and local Welsh councils want tolls scrapped altogether.

Bristol is the UK’s fastest growing economy outside of London and its house prices are the fastest growing in the UK as South Monmouthshire establishes itself as part of Bristol’s commuter belt.

House prices have risen about 10% over five years in the South Monmouthshire postcode areas of Chepstow, Caldicot and Magor, in comparison to Zoopla’s 2% Wales average.

But in Bristol, just the other side of the River Severn, property prices have risen 37% and Mr Heaven said south east Wales’ favourable prices and lower rates are proving attractive to house buyers.

“Eighty per cent of people buying houses in Monmouthshire from me are coming from Bristol,” said Mr Heaven, the owner of Crown Estate Agents on Chepstow High Street.

“Houses are in huge demand. In fact, there aren’t enough houses. Property is being snapped up within days, sometimes hours and prices are flying up.”

“With the railway electrification of the south Wales mainline, the planned south Wales Metro, the proposed M4 Relief Road around Newport, coupled with the beautiful countryside of South Monmouthshire and the Wye Valley, this is desirable place to live.”

Two big housing developments are planned at Chepstow’s old dockyard and near its hospital while a new estate is heading for Undy, bordering the M4 motorway near Magor.

Severn Tunnel Junction railway station in Rogiet, between Caldicot and Magor, has recently undergone an £8m refurbishment while a new train station at Magor has the backing of Monmouthshire council and is part of the new South Wales Metro proposal.

Nathan Reeks, owner of Nathan James Estate Agents in Caldicot and Magor, explained why south Monmouthshire is becoming attractive for commuters from Bristol.

“We recently had a couple from Bristol who bought a property in Rogiet near Severn Tunnel Junction station,” said Mr Reekes.

“They bought a four-bedroom detached house with detached garage for about £295,000, after selling their three-bedroom mid-terrace in Bristol for £390,000.”

“So they made almost £100,000 on a bigger house and the new owner can get to his work in Patchway on the outskirts of Bristol quicker from Severn Tunnel Junction than from when he lived in Bristol.”

“That’s typical of our business in the last six months as since the government was announced they are reducing the bridge tolls, 80% of my buyers have come from over the Severn Bridge.”

“The accessibility for Bristol, the Midlands, the South West, South Wales, London and Heathrow Airport is all the more desirable as South Monmouthshire offers a semi-rural location with a stunning backdrop.”

“It’s a great place to bring up children and with a new comprehensive school opening soon in Caldicot, the Monmouthshire market is very strong.”

The article was produced by Severn Quay For more articles and further information please visit www.severnquay.co.uk/7q-news/