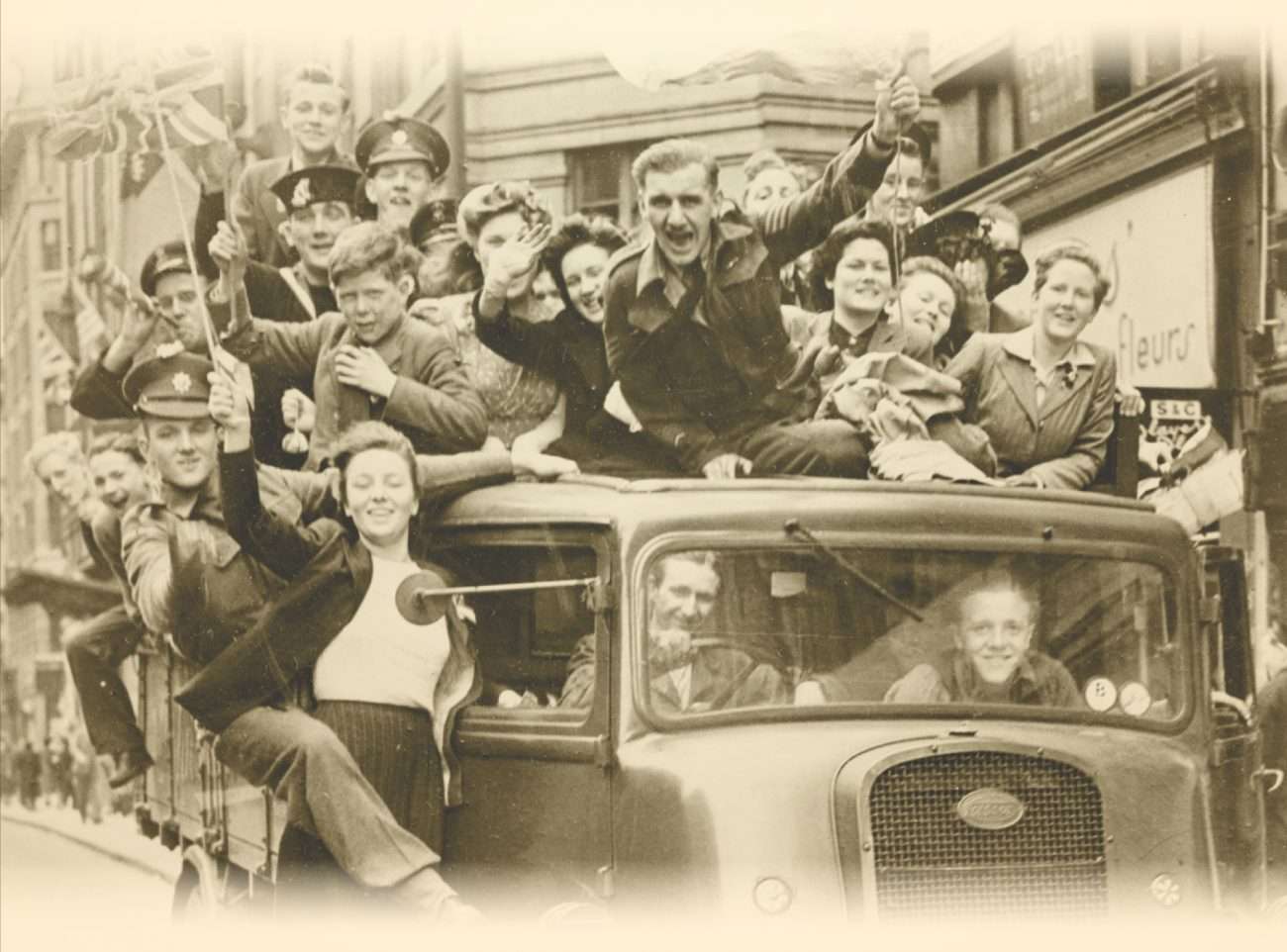 The 8th May is the diamond anniversary of Victory in Europe Day. Following six years of suffering under Nazi terror, the liberation was summed up by the words of wartime Prime Minister Winston Churchill when he said: “My dear friends, this is your hour”. Even the young Queen joined the exultant crowds.

This seventy-fifth anniversary marks the unconditional surrender of Germany to the Allies, the date when war in Europe finally ended. Although the Second World War wasn’t to finish completely until August 1945 with victory against Japan, millions of people nevertheless took to the streets to express their joy and relief.

Hitler had committed suicide in his bunker on 30th April 1945 during the Battle of Berlin, having first killed his dog and executed his wife Eva Braun. The short-lived Flensburg Cabinet formed under Grand Admiral Karl Dönitz was put together hastily in the aftermath. The cabinet negotiated terms and authorised their surrender, which was to lead to the division of Germany.

King George VI and Queen Elizabeth the Queen Mother stood shoulder to shoulder with Prime Minister Winston Churchill on the balcony of Buckingham Palace as thousands of people filled the Mall. In an unprecedented move, the Queen, then Princess Elizabeth, who had been devoted to the war effort throughout, was allowed to wander undetected amongst the crowds with her sister Princess Margaret.

A film was made in recent years about their fictional exploits and the Queen has described that time as “the most memorable night of my life”.

People had been prepared for Germany’s surrender following Hitler’s death, so when the BBC interrupted its broadcasts late on the evening of 7th May to announce that the following day was Victory in Europe Day and would be a public holiday, it didn’t come as a huge surprise. However, it was certainly a most welcome one following the widespread destruction and casualties of millions during the course of the war.

After the years of blackouts and bomb shelters, celebrations were very much centred outside on the streets. Trafalgar Square heaved with around fifty thousand revellers, many of whom kissed strangers and jumped into the fountains (a tradition that was to subsequently feature on New Year’s Eve until it was stopped in 2002 and New Year celebrations moved to the Embankment).

The government decreed that red, white and blue bunting could be purchased without having to use ration coupons and the Ministry of Food managed to ensure that there was enough beer available for the hundreds of pubs whose opening hours were extended (although many still ran dry by 10.30pm).

Rationing continued until 1954 so on VE Day people had to make do with the ingredients they had available. With party staples like sweets and sugar, cake, chocolate, eggs and butter in short supply, cooks had to be creative.

Wartime food would have included things like dripping sandwiches, potato and leek pie, Spam, corned beef and faggots made using ground up offal. However, there is no doubt that many a celebratory cake was made using the family’s sugar and powdered egg ration for VE Day.

The enduring wartime community spirit meant that everyone pulled together to ensure this was not just a community but a country-wide celebration. Manufacturers even managed to produce commemorative mugs in time for the event.

Abroad, in places like New York, hordes of revellers filled Times Square, and on the Champs Elysée, Parisians sang the First World War classic ‘It’s a Long Way to Tipperary’.

As well as street parties, there were parades, dances, bonfire gatherings and commemorative church services. Thousands of people had endured hardship and lost loved ones during the war and no one was forgotten. In London, St Paul’s Cathedral, which had famously survived the Blitz, held ten consecutive thanksgiving services. All were packed.

Sadly the celebrations that were due to take place this year – which included an extended licence for pub hours – have had to be cancelled. But let’s raise a glass and look forward to our own freedom to come in the following months.